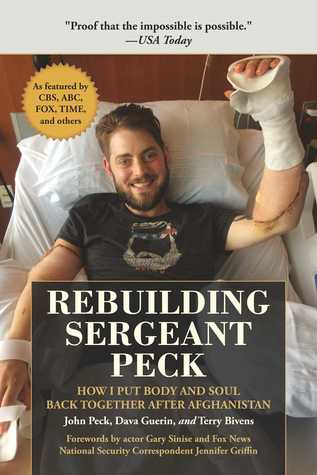 Title: Rebuilding Sergeant Peck; How I Put Body and Soul Back Together After Afghanistan

Born in 1985 to a single mom, John Peck was destined for military service. Throughout his childhood he remained resilient despite repeated physical and emotional abuse, family financial struggles and homelessness. However, he continued to persevere and achieve his dreams. In 2005, Peck joined the Marines. Little did he know just how much it would change his life, in ways he could never have imagined.

Not long after enlisting, Lance Corporal Peck was sent on his first deployment to Iraq. There he spent his time patrolling the area in order to network with the locals and complete searches to gather intelligence on terrorist cells. During one of these patrols his vehicle rolled over a pressure plate triggering an improvised explosive device (IED).This incident resulted in a traumatic brain injury (TBI) that promptly ended his deployment and nearly ended his military career.

The TBI that Lance Corporal Peck received caused much more than just momentary confusion. He spent years undergoing evaluations and rehabilitation to learn how to live with the resulting memory and motor damage. With lots of hard work and support, he was able to prove that he was still capable of being a fully functioning Marine with minimal accommodations. In 2009, he reenlisted with the hope of once again being deployed and a year later was sent to Afghanistan.

On May 24th John stepped squarely on the missed device and instantly lost both legs and his right arm. While his left arm was still attached, it was severely injured which would eventually result in it too being surgically removed.

John spent months being stabilized. Every conscious moment, he begged the medical staff to let him die. Between the pain and reality of his new disability he could not imagine there was any purpose in his life. It wasn’t until he witnessed others overcoming similar injuries and living fulfilling lives that he began to see a future for himself as well.

He began to build his network of support, and the more people he connected with the more meaning he saw in his life. When he realized that leaving his darkness behind was helping others do the same, he became even more motivated to regain his independence. As he began to be an active participant in his treatment, he earned a new rank: Sergeant. In this leadership role, he reflected on all the trauma he had overcome thus far and was determined to dig within himself and awaken that same perseverance and resilience he’d had as a child. John began to advocate for himself and take his new challenges head on, leading to his to becoming the first successful recipient of a double arm transplant.

As an Amazon Associate I earn from qualifying purchases of the items linked in my post.

Its a full circle moment again in my life. I started at Busch Gardens in 2007 seasonally in entertainment but in March 2008 I joined the Zoo Education and Conservation department and found my family and home. This weekend I began to transition from my part-time keeper role in the Animal Care Center (which I deeply love and miss already) to a full-time Senior Educator role back in the Zoo Education and Conservation department. I am excited to continue to build my skills as a science communicator, increase access to conservation and zoo related sciences for all populations, help train and inspire future educators, animal care professionals, conservationists, advocates, and more as well as staying rooted in the facility and zoo that inspired me in this field from an early age.
One of my goals this year was to unplug and recharge in nature at least once a month. This month not only did my unplug help me with professional development but it greatly opened up my options for nature exploration.
This is what it looks like to wear a mask! No I don't mean my woody double layered hand stitched health and safety mask. This last few weeks have been incredibly trying for me. My depression and anxiety has been kicked into high gear. I haven't been sleeping well amongst numerous other things. But, I put on my happy face mask everyday so not to burden others with my mental health and its not okay.
Starting my new year off right! Began the day with some tall blondes who are reminding us to keep our chins up and ended it hanging out with my granny. Looking forward to all the things 2021 has in store. (With Ruby the Reticulated Giraffe)
I know 2020 was a rough one and it won't be instantly easier tomorrow. But 2020 wasn't all bad. For me it was full of *Magic* and these are the memories I am choosing to carry forward.
As we near the end of 2020 here is a little reminder to be grateful for the small things. This year may not have gone as anyone would have hoped but I bet it was still filled with small little wonderful moments.